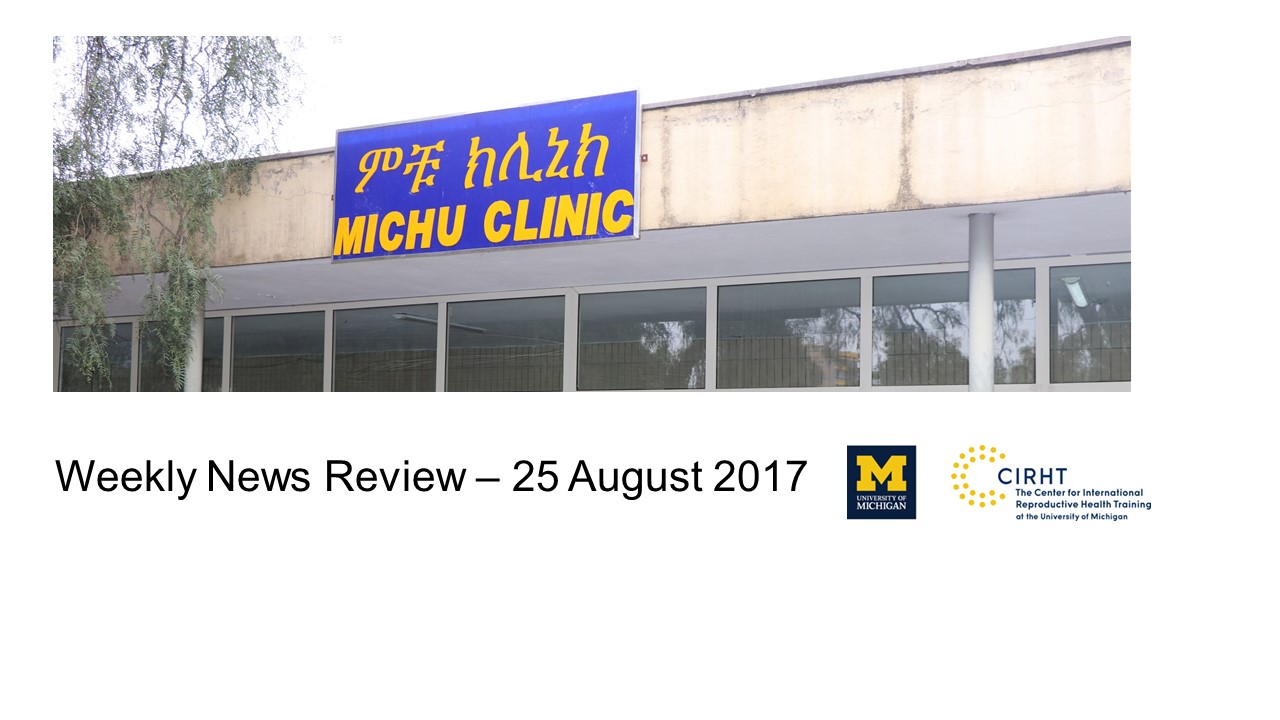 Whatever the political climate, and no matter how good the counselling might be, the availability of family planning commodities – short-term and long-term contraceptives for men and women – is essential for women to be able to take control of their reproductive health.

Getting those supplies “the last mile” can be a challenge across Africa, and is defined as “getting life-saving contraception to a community-based health outlet, and then into the hands of clients.” In Tanzania (where “a rise in contraception use reflects hope”) the Tuungane Project in the remote and rural villages around Lake Tanganyika in Western Tanzania, was designed to overcome a variety of challenges through an integrated approach, addressing environmental and reproductive health issues simultaneously. FP Voices has a vignette this week from Malawi about Siti Kachingwe, Nurse-Midwife and Project Manager of Engender Health’s Last Mile project there.

Ghana, where “contraception use is low in the Upper East Region,” is being urged to create “incentives” for the use of family planning methods. The availability of the Sayana Press in Uganda “offers hope.” In Madagascar, with funding from the United States Agency for International Development (USAID), the Jhpiego-led Maternal and Child Survival Program (MCSP) is working with the Ministry of Health to expand access to long-acting family planning services, including implants and IUDs.

All of these efforts exist with a menace in the background. Devex reports that the Global Health Supply Chain – Procurement and Supply Management project, a $9.5 billion effort described as a ‘cornerstone’ of U.S. efforts to end [among others] maternal and child death, is reporting results that could put access to lifesaving health commodities at risk.”

What happens when the marketplace is not regulated comes in a story from the Philippines about a women-led crime ring selling “abortion elixirs.”

Physical waiting centers for maternal health in Namibia are being funded by the EU and the WHO. Those centers, like reproductive health clinics, are only useful if they are accessed, and in Nigeria young people are being told not to be ashamed to use them.

Sometimes denying access to the commodities is repressive, as in stories from Zambia, where a study shows that men control women’s use of HIV-prevention gel, or Uganda where a local councilor “beat up his wife” when he discovered missing condoms.

Romper reports on 5 Contraceptives Scientists Are Developing Right Now: “New technologies are cropping up in the field of contraception, including hormone-releasing microchips, revamped condom designs, and low-cost, long-lasting male birth control injections… The good news is that increasing choice for all women appears to be at the center of many of those innovations.”

VOA has the story of a group of Kenyan girls who call themselves “The Restorers,” who are “taking on Female Genital Mutilation (FGM) with an app, called i-Cut, which connects girls at risk of FGM with rescue agents and offers support for those who have already been cut. It also provides information for anyone seeking to learn more about the practice.” In Rwanda, an app called “Tatine” (“Auntie”), “allows adolescents and the general public can ask any question related to sexual health and get an answer including questions that society considers taboo.”

While IUDs are widely used and proven to be safe and effective, one woman chose to tell the “nitty gritty details” of having one.

An article in Vox says that the development of the artificial womb “could completely change the debate over abortion: If a fetus can be transferred to a fabricated womb, can the right to abortion survive?”

Even if the commodities and technology are available, what are the financial barriers for women to gain access? One problem affecting the low number of OB-Gyns in South Africa is medical litigation, which is “pushing the country’s scarce gynecologists out of work and threatening to bankrupt the national health system.” A system of mediation is being suggested as a solution. (In the UK, in response to a similar concern about litigation, a “Rapid Resolution and Redress (RRR)” scheme has been proposed by the health secretary.)

In Kenya, a maternity fee waiver was implemented in 2013 to remove out-of-pocket fees for skilled delivery in public health facilities across the country. This would enable thousands of pregnant women delivering at home to access proper services. “The effect of the new policy was immediate. There was a 22% increase in skilled deliveries in facilities between 2013 and 2015.” Nigeria has mandated free treatment for women with fistula.

Elsewhere, Guardian Australia looks at how prohibitive expenses interact with legal restrictions to limit access, while the deputy Labor leader points out that, “The legal right to access a termination isn’t much use to a homeless teenager when the upfront cost of an abortion is more than $500.” In the US, a study shows that lack of abortion clinic access in rural areas is causing both medical and financial hardship, and ultimately costing the health system more. That is one aspect of what The Wall Street Journal calls “Rural America’s Childbirth Crisis”

The British government is no longer covering the costs of abortion services in Northern Ireland, causing Marie Stopes to have to charge patients for them. The US Department of Health and Human Services is facing a legal battle over its proposal to cut free contraception coverage. In the Indian state of Odisha, the government is offering free injectable contraceptives.

In Uganda, health advocates have resurrected the safe abortion fight (while another article notes the country “loses sh25b in post-abortion care”).

Chile’s relaxation of its abortion law has fostered hope that it could set an example for the rest of Latin America, and that may be the case in El Salvador, where two bills have been introduced that would accomplish just that, against a very difficult political environment. Action for legal access to abortion is also taking place in Ireland and in the UK in Northern Ireland and the Isle of Man. Activists in Indonesia are decrying a delay in enacting that country’s abortion law, saying it denies sexual abuse victims’ rights. Toronto politicians are pushing for “a ban on graphic anti-abortion signs.”

Anti-choice activists in Poland and Ohio are pressing for laws that deny abortion access if a fetus shows signs of birth defects, while choice advocates press the argument that aborting for Down Syndrome is “not a precursor to eugenics: “When a woman makes a decision to end a pregnancy for any reason, it’s her business and her business alone.”

On the crime blotter, authorities in Malta have issued an international arrest warrant for a man who “forced a woman to have an abortion” (an Irish man is accused of the same crime); two women in Hong Kong were jailed for performing illegal abortions in an apartment complex.

And a Finnish fashion designer has created maternity wear for 12-year-olds to highlight worldwide child pregnancy.

A heartening story from News Deeply about African Communities Working Together to End Female Genital Cutting.

Advance Family Planning will be expanding its advocacy work with PATH. PATH has also been nominated for “Saving Lives at Birth” grants to accelerate diagnostic and device innovations that prevent maternal and infant deaths at birth. Americares has made a new family planning commitment.

The increasing importance of midwives was discussed in articles about French-speaking Africa, Malawi, and Rwanda.

Family planning access, counselling and service need to be targeted in specific circumstances, including the visually impaired community, those suffering from hunger or traumatized by war, women who have previously had miscarriages and trans and non-binary parents. And when family planning is integrated into greater health initiatives, it can affect preventing non-communicable diseases and improving nutrition.

The US context this week

The Trump administration is “needlessly” slashing pregnancy prevention education programs, which have been shown to be effective, and is adding money for abstinence-only education, which has been proven to be ineffective.

Republicans are labelled as “dismissive of women’s health needs” and “waging a war against birth control.” Pro-choice Republicans and ant-choice Democrats find themselves isolated. In Texas, where a new law would force women to purchase “rape insurance” should they ever need an emergency abortion, part of the anti-choice campaign’s tactics to make abortion seem dangerous, one of the leading agencies the state delineated as a substitute for Planned Parenthood has performed so badly that it lost its $7 million contract.  Tennessee prisoners say they were coerced into taking birth control by being “offered 30 days off their sentences in exchange for a vasectomy or a long-acting birth control implant.” More news, mostly restrictive, from other states including Ohio, Pennsylvania, Virginia, and South Carolina, though Oregon is proceeding with greater access and education. All of this leading to a plea to stop ”micromanaging” contraception access in the US.

The memory of consequences for women’s health in pre-Roe v. Wade America is being kept alive as several media projects about the “Jane Project” are in production. On the 30th anniversary of the release of the movie Dirty Dancing, the screenwriter says the ground-breaking depiction of a back-alley abortion almost didn’t make it to the screen, but survived because she had written it into the fabric of the whole movie and not made it an expendable add-on.

Many U.S. Abortion Patients Seek Abortion Care More Than Once in a Lifetime, Guttmacher, 24 Aug 2017

Artificial wombs are coming. They could completely change the debate over abortion. Vox, 23 Aug 2017

What Precautions Do I Need To Take During Pregnancy If I Had A Miscarriage Before? Experts Weigh In, Romper, 23 Aug 2017

The Problem With Shutting Down Abortion Clinics In Rural And Low-Income Areas,  Huffington Post, 23 Aug 2017

Legal challenge to abortion regulations can proceed, We are WV Proud, 23 Aug 2017

Why did the Trump administration pull the plug on programs to prevent teen pregnancy?, STAT news, 23 Aug 2017

Bill would make abortion of fetus with Down Syndrome illegal, News5 Cleveland, 22 Aug 2017

If Northern Irish women can now have an abortion in England, why not here?, The Guardian, 22 Aug 2017

I Almost Died During Childbirth. I’m Not Alone., Cosmopolitan, 21 Aug 2017

How much do abortions cost across Australia?, The Guardian, 21 Aug 2017

Ending a Pregnancy Because of Down Syndrome Is Not a Precursor to Eugenics, The Cut, 21 Aug 2017

The Back-Alley Abortion That Almost Didn’t Make it into ‘Dirty Dancing’, Broadly, 21 Aug 2017

This Is Why Having Less Money Limits Your Reproductive Choices, BuzzFeed, 21 Aug 2017

I Got An IUD And Here Are The Nitty-Gritty Details You Should Know…, Huffington Post, 20 Aug 2017

It’s time for the feds to stop micromanaging birth control in the US, The Hill, 20 Aug 2017

Insult to injury: how Trump’s ‘global gag’ will hit women traumatised by war, The Guardian, 1 Aug 2017

What Is the Most Effective, Low-Cost Method for Inducing Labor in Women With Pre-Eclampsia?, MHTF, 23 Aug 2017

Abstinence-Only-Until-Marriage: An Updated Review of U.S. Policies and Programs and Their Impact, Journal of Adolescent Health, 22 Aug 2017

Maternal and child health services and an integrated, life-cycle approach to the prevention of non-communicable diseases, BMJ Global Health, 19 Aug 2017

Aspirin versus Placebo in Pregnancies at High Risk for Preterm Preeclampsia, NEJM, 17 Aug 2017

Should I stay or should I go? Consistency and switching of delivery locations among new mothers in 39 Sub-Saharan African and South/Southeast Asian countries, Health Policy and Planning, 4 Aug 2017

Three recommendations to the new Director-General of the WHO on how to deliver for girls and women, Reproductive Health, 14 Jul 2017

Kenya maternity fee waiver is great – but there are still gaps in the policy, The Conversation, 22 Aug 2017

Squatter names triplets Mandago, Shollei and an MP-elect after failing to vote, The Star, 20 Aug 2017

Midwives Lead Before and After Birth, Johnson & Johnson, 23 Aug 2017

How best can we make sure that family planning commodities are available at the last mile?, FP Voices, 21 Aug 2017

How hunger affects the mental health of pregnant mothers, The Conversation, 20 Aug 2017

Rise in use of contraception reflects hope, The Citizen, 21 Aug 2017

She was pregnant almost every year. She needed a choice — and the power to protect her island, Pathfinder International, 23 Aug 2017

Pelvic exam: Do you know the limits of your physician?, Daily Monitor, 20 Aug 2017