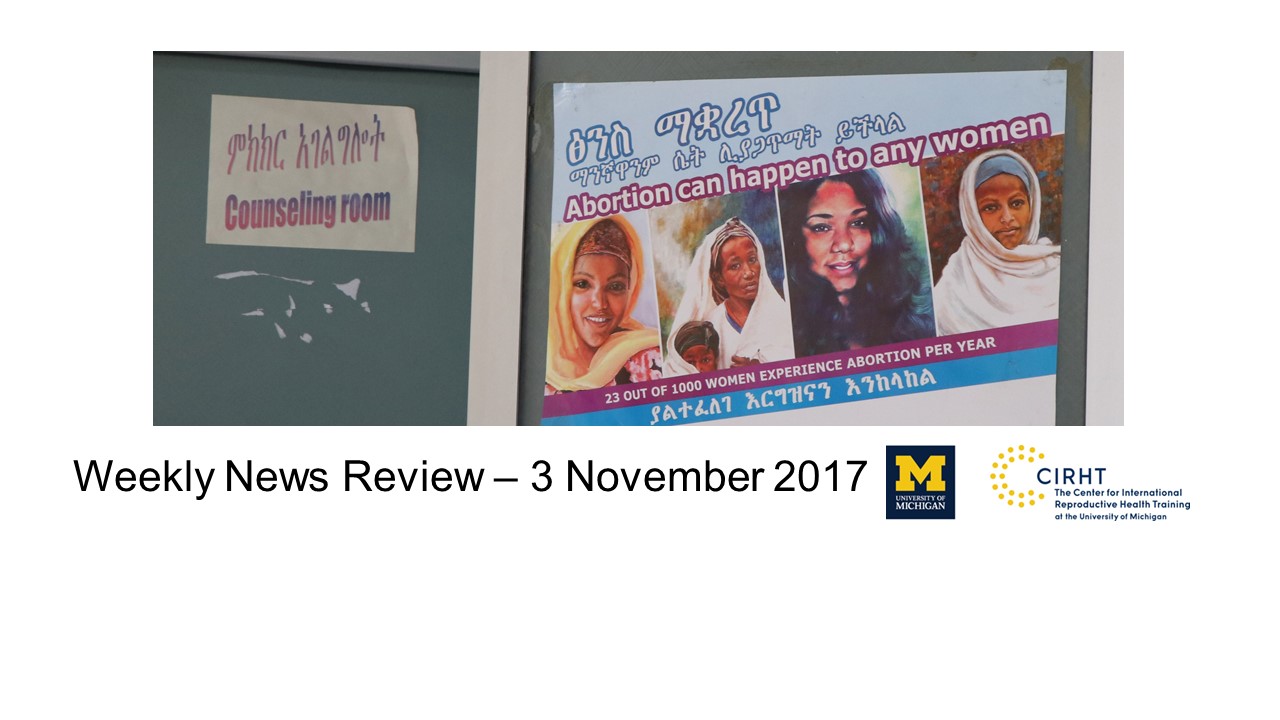 Sex education programs can be the first steps towards greater usage of family planning methods throughout people’s lives. And families using those methods “are less likely to end up in poverty.”

Across Africa, Social Behavior Change Communications (SBCC) projects aimed at youth have shown effectiveness, reaching youth where they work, live and play, and in “vulnerable” locations. Several case studies presented by the Health Communication Capacity Collaborative (HC3) provide examples from Benin (two of them), Kenya, and Madagascar (two of them). Another project in Madagascar looks at a “whole-school approach” to sexuality education, as a strategy to “radically improve” access to reproductive education. Population Services International (PSI) worries that “Tanzania’s youth don’t relate to family planning” and has expanded its Adolescents 360 project to expand outreach based on feedback from teenage girls. The solutions focus on changing how adolescents feel about contraception – not only how they think about it. This aligns well with the goal of human-centered design to build empathy. .A similar approach to give adolescents their own voice was taken in a project in Sierra Leone. UNFPA in Somalia is stepping up “youth friendly” reproductive health services in a place where they are “non-existent, preventing young women and men from accessing such vital care at the appropriate time.” A study published by PLOS One looks at how ethnographic factors affect family planning uptake in three districts in Ghana and concludes, “Health teams working to improve sexual and reproductive health care must find suitable context strategies that effectively work to improve women reproductive care needs at their operational level.”

In Malawi, the health minister is encouraging faith based institutions “to open up and speak on issues like sexual reproductive health (SRH),” calling it a “a key step in ensuring that Malawi has a well-managed and healthy population.” That’s in contrast to the debate in Namibia about Comprehensive Sexuality Education (CSE), where “a section of the Namibian ecumenical society has expressed its reservations against what they perceive as sex education in school, especially at primary level… Yet in this secular era, teachers cannot, must not and should not be expected to approach such a matter purely from a religious point of view.” Mozambican women from Tete received information and access to contraceptive methods, and were urged to use them, during the province’s National Health Week. In Nigeria, achieving the country’s family planning goals requires addressing cultural barriers, because education is a big factor in reducing maternal mortality; the MTN Foundation and Action Health Incorporated each have outreach initiatives to increase use of family planning methods; and 59 health workers in Bauchi state were urged to “mobilize women to embrace child spacing to reduce maternal and child mortality rates.” Rwanda is addressing the issue by “creating a platform that avails information on sexual reproductive health, using technology called ‘Mobile For Reproductive Health’ (M4RH).”

Sometimes education and outreach can’t achieve their goals on their own, as in Uganda where a reluctance to have vasectomies and “too-small condoms” were cited as issues.

In California, “the Healthy Youth Act mandates that sexual education in the state include information on abortion, consent, sexual assault, and harassment. When it was passed, [in 2015] California was also the only state that required sex education be medically accurate, age-appropriate, LGBT-friendly, and culturally-inclusive.” It has been a success.

The lack of education on these matters has terrible real-world effects, as in a story about “the slow march to unsafe abortion” from Malawi and another about a schoolgirl death from unsafe abortion in Lesotho.

Rwanda is considering changing its penal code to remove a judicial barrier to safe abortion, which “will save lives of people who would have otherwise ended up in illegal procedures,” according to an advocate for the change. A judge in Uganda, where the  High Teenage Pregnancy is a Set Back to Uganda’s Middle Income Drive, is urging, “Don’t criminalise women who abort.” Marie Stopes International has been criticized in Kenya for a staff visit to a Catholic-sponsored secondary school promote family planning, “having drawn so much ire that a civil society now wants the health ministry to de-register it altogether… And on the provision of abortion services, which appears to be in contravention of the Constitution, [they] said they were abiding by the law.”

US Abortion Threats at a Fever Pitch

In the Federal government: The Department of Health and Human Service’s strategic plan for 2018 “protects Americans at every stage of life, beginning at conception,” three words which could “render all abortions illegal, and could also criminalize most forms of contraception, with the exception of condoms.” HHS also is about to release a notice of funding for the Title X program, which annually awards $280 million in grants to clinics around the country for providing birth control and other family planning services to about 4 million Americans, most of them low-income. Some Title X recipients — especially clinics that provide abortions — are nervously awaiting the notice, which could bar them from using non-taxpayer dollars to offer abortions, restrict the types of contraception Title X will cover or shift the program’s focus from birth control to abstinence.” The head of the HHS’s Office of Refugee Resettlement “confirmed reports that he has visited pregnant minors in his custody to persuade them to carry unwanted pregnancies.”

In legislatures: The tax bill that was introduced in Congress includes a provision that explicitly states unborn children are eligible for tax-advantaged 529 college savings plans, strengthening the argument that unborn children should be treated as people and given equal protection under the law. Congress held hearings on “The Heartbeat Protection Act” which would prohibit all abortions after six weeks. Another bill was introduced that would impose taxes on bonds, which are normally tax-free, which are used to provide facilities owned by abortion providers. These bills will “bring back coat hanger abortions.” The administration’s controversial nominee to be ambassador-at-large for global women’s issues, a prominent conservative activist, nevertheless decided to criticize fellow Republicans. A Republican New York Congressman was greeted by silent protestors wearing “Handmaids’ Tale” attire. The Ohio legislature passed a bill banning abortion after a Down syndrome diagnosis. Wisconsin is considering a bill that would prohibit state health insurance programs from covering abortions for state workers.

In the courts: Two national advocacy groups filed a federal lawsuit challenging a rule change by the Trump administration allowing more employers to opt out of no-cost birth control for workers The administration is considering disciplinary action against the ACLU lawyers who fought for the right of an under-aged undocumented teenager to have an abortion. In California, a judge struck down a law requiring “pregnancy crisis centers” to give information about abortion availability as a violation of free speech. The ruling will be appealed. In Texas, where an editorial in The American Journal of Public Health “sounds alarms” over cuts to family planning, a challenge to a law banning D&E procedures is going to trial. Planned Parenthood is suing the state of Missouri over a portion of its new abortion law involving requirements for administering abortion pills. In Florida, a man convicted of killing an abortion doctor in 1993 was denied parole and will serve his sentence until 2043.

In political races: Abortion stances making headlines in Michigan, Alabama, New Jersey, West Virginia, and in Ohio, where the governor asks naively, on abortion, “why can’t we agree to disagree,” ignoring all of the proposed restrictions listed above.

On the positive side of the struggle, a new abortion clinic is about to open in South Bend, Indiana. An abortion provider in Maryland who was driven from his clinic is vowing to re-open. And a woman provider was sick of the stigma of her work and defiantly had a coat hanger and the words “Never Again” tattooed on her arm.

Two philosophical arguments: One philosopher argues that providing contraception and abortion access should be agreeable to conservatives who want to reduce welfare and poverty: “1) Anyone on welfare should be eligible for free contraception materials (condoms and/or pills). Consider this an investment in reducing future welfare rolls. 2) Anyone on welfare is eligible for a free voluntary sterilization procedure.  A further investment in reducing welfare rolls. 3) Women who conceive while receiving welfare payments will have a once-in-a-lifetime opportunity to get a free abortion. Welfare payments will not be increased for the parent(s) of any children conceived while they are on welfare.” The conservative Federalist proclaims “The abortion-rights Left seeks to frighten pro-choice women into believing that… Republicans will force women to undergo pregnancy or resort to back-alley abortions., [and the] equally absurd the notion that… overturning of Roe v. Wade, will render all, or even most, abortions illegal,”
insisting that Congress and legislatures will assure rights, based on jurisdiction and political will. It’s a possibility noted by the liberal Nation, which asks, “Can Cities Save Our Reproductive Rights from the Grabby Hands of Donald Trump?”

You Do Uterus: On fundamentals like abortion, we can’t ‘agree to disagree’, Daily Trojan, 2 Nov 2017

Can Cities Save Our Reproductive Rights from the Grabby Hands of Donald Trump? , The Nation, 2 Nov 2017

This Gubernatorial Candidate Says He Would ‘Unabashedly Lead’ on Protecting Reproductive Rights in Michigan, Rewire, 2 Nov 2017

Doug Jones speaks on abortion issue, wants ‘to be clear’ on where he stands, AL.com, 2 Nov 2017

Here’s the next way the Trump administration could go after abortion providers, Washington Post, 2 Nov 2017

A threat to reproductive health, The Appalachian, 2 Nov 2017

I Had an Illegal Abortion in 1965 and Could Have Bled to Death. We Can’t Go Back to Those Days. Cosmopolitan, 2 Nov 2017

Children of parents using birth control are less likely to end up in poverty, MarketWatch, 1 Nov, 2017

Shortsighted planning: Changes to the mission of HHS mean family planning is under attack by the president., Houston Chronicle, 31 Oct 2017

Can You Skip Birth Control Placebo Pills? Here Are 5 Things You Should Know Before You Do, Elite Daily, 31 Oct 2017

Are you using the wrong contraceptive? As it’s revealed one in FIVE young women have experienced an unwanted pregnancy, experts say we MUST prioritise sexual health and ask the awkward questions, Daily Mail, 31 Oct 2017

Late-stage abortion provider won’t succumb to protesters who forced him out of his last Maryland clinic, Daily Intercept, 30 Oct 2015

One life, one change: Against stereotype, a specialist in a procedure that has very few takers, Indian Express, 30 Oct 2017

7 Reasons Your Period Could Be Late, Other Than Pregnancy, Allure, 30 Oct 2017

Reflections on Women-Centered Health Care Then and Now, MHTF, 30 Oct 2017

No, Overturning Roe v. Wade Will Not Make Abortion Illegal, The Federalist, 30 Oct 2017

‘No more royal babies’ Kate and William urged to NOT have more kids to stop APOCALYPSE, Daily Star, 29 Oct 2017

Argentina bans abortion in most cases. So why is its abortion rate far higher than that of the U.S.?, Los Angeles Times, 29 Oct 2017

Coat Hanger Abortions Are Making a Comeback With Introduction of New GOP Bill, The Root, 27 Oct 2017

Evaluation of the Effectiveness of the HERhealth Model for Improving Sexual and Reproductive Health and Rights Knowledge and Access of Female Garment Factory Workers in Bangladesh, Business for Social Responsibility, 2 Nov 2017

The contribution of changes in sexual activity and contraceptive use to the decline in conception rates among under-20s: A comparison of Britain and the United States, Guttmacher, 1 Nov 2017

Protocol for a scoping review to identify and map the global health personnel considered skilled attendants at birth in low and middle-income countries between 2000 and 2015,BMJ Open, 15 Oct 2017

Marie Stopes speaks out amid storm on abortion, contraception, The Nation, 29 Oct 2017

The power of awareness in reproductive health among youth, New Times, 1 Nov 2017

‘Use of contraceptives remains low in rural women’, Newsday, 29 Oct 2017