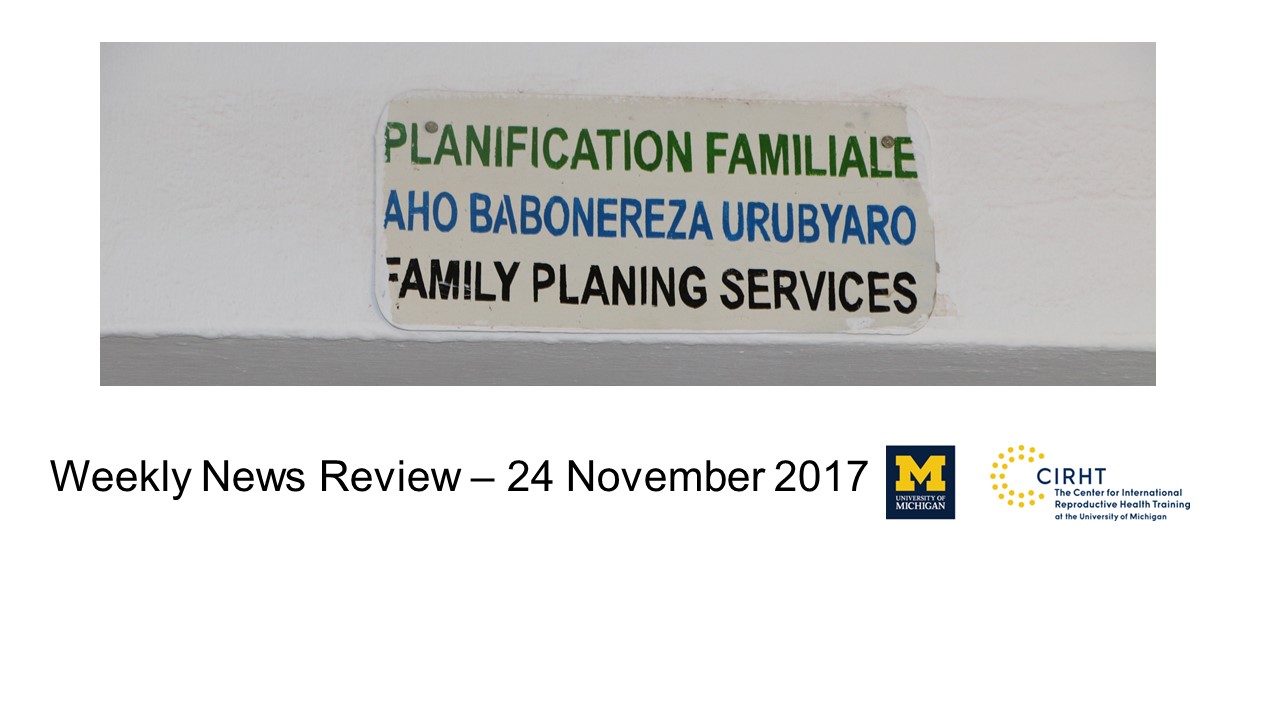 Simply put, “when a woman can control when she has children, she can control her future.” One article calls affordable maternity care and birth control “the foundation of a family’s future.” In Kenya family planning enhances living standards and sustainable development; in Ghana increasing information will “empower African women.” The National Planning Council in Ghana is urging family planning “acceptance…to prevent unwanted pregnancies and save lives. Also the way forward to reduce pressure on both the family and the government budget.”  Family planning services are finally reaching inhabitants of Tanzania’s Lake Victoria islets. A major conference in Gambia of countries across the Sahel on “Islam, Family Well-being and Harnessing the Demographic Dividend” worked to create understanding that family planning and Islam are not mutually exclusive. Family planning uptake is even on the rise among refugees in Uganda.

The consequences are real for individuals and societies: one province in Angola reported a doubling of teen pregnancies in one year. The Ugandan government is concerned that the country’s population could hit 63 million in 12 years

Oyo province in Nigeria has a Maternal Mortality Ratio (MMR) of 262 per 100,000 due to “weak implementation of the family planning/child spacing programmes.” 25% of adolescents are sexually active in that country, and more people are using family planning methods, but progress is lagging because of “longstanding myths and misconceptions.” The tragic death of a mother and her newborn quadruplets will “change healthcare in Nigeria forever.”

Barriers to use can be systemic or psychological. An article in the Journal of Adolescent Health identifies confidentiality concerns as the main reason American 15- to 25-year-olds are reluctant to seek family planning care and advice. A debate in Rwanda asks whether giving contraceptives to teens is “practical or immortal”. Sierra Leone has identified its barriers to access as money, distance, permission and low male involvement, and has committed to a new strategy to lower its MMR from an astronomical 1,165 per 100,000. From Niger a story about a Pathfinder program to work with men and religious leaders to “advance” their opinions about contraception.

Getting people to use contraception or change their attitudes about abortion sometimes requires imaginative technology and approaches. Developments in vaginal ring technology “have the potential to last longer, provide protection against HIV as well as pregnancy, and expand the choices of women in low-income settings.” A Kenyan beauty pageant for young people crowned “Mr. and Miss Y2Y” (Youth-to-Youth), providing entertainment and access to sexual and reproductive health services. The My Calendar period tracker app is gaining popularity in Uganda, though Reproductive Health Uganda recommends “back-up” methods such as condoms on “days when they are not sure”. South African news service Bhekisisa created “#SizaMap, South Africa’s first searchable map of designated, safe, legal, free abortion providers.” Canada has made access to medication abortion much easier, leading activists in the US to look at distribution through pharmacies, by advanced practice registered nurses, or other ways that will make it simpler and less stigmatizing for women to access. An innovative protest: “A vending machine was set up by a feminist group in downtown Seoul to call for the legalization of abortion pills.”

Fortunately, for the moment, people don’t have to go back to ancient and medieval birth control methods, like “relying on amulets made of herbs, dead animal bits, menstrual blood, or other random items (including feces), or a weasel testicle, tied around the neck or thigh during sex. They also relied on rituals like circling spots a pregnant wolf pissed on, among others.”

The Population Reference Bureau’s SAFE project is “dedicated to expanding access to safe abortion by reaching global and national audiences with the latest data and evidence on abortion, and building the capacity of advocates to achieve positive change [in several African nations]. Each year in Africa, approximately 1.6 million women are treated for complications from unsafe abortion, and unsafe abortion is a leading cause of maternal death in the region.” The BJOG looks at abortion care as a key women’s health service. To spread the word, IPPF has produced How to report on abortion – A guide for journalists, editors and media outlets. Please pass it along!

In Rwanda, the ongoing discussion about how to apply the penal code to abortion is moving its way through parliamentary committees – making access easier by eliminating the need for judges to approve of the procedure, and increasing the punishment for those who violate the law. National debates are also taking place in Brazil, Ireland, Australia, the UK, Cambodia, and Nepal.

As abortion rates in US hit a historic low, according to the CDC, the attempts at restrictions just keep piling up. One former Trump advisor called women’s reproductive rights “worse than child molestation”. A federal agency is referring girls to counselors picked by an anti-abortion group. While the administration is defending birth control rules that pit religion against women’s health, it is preparing new ways of ending funding for all family planning services

Wins for access in Texas and Massachusetts; challenges to restrictions in Kansas, Maine and Florida; a Missouri law requiring a waiting period is “driving women to seek help elsewhere”; and the hardline anti-abortion supporters of Alabama Republican senate candidate Roy Moore have invented the term “full-term abortion” to demonize his opponent in an upcoming runoff election. (All recent state actions are nicely summed up by the Center for American Progress.)

NARAL Pro-Choice America has even warned that the proposed move to end “net neutrality” is a direct threat to reproductive freedom’.

All of these actions have international consequences as well: Rohingya, Syrian, and Yemeni women are paying for Trump’s ideological withdrawal of UN funds.

The week saw an expanded examination of the role of men in family planning. The “vasectomy fortnight” is continuing, to encourage more male involvement. Devex asks, “Could innovations in male contraception be the future of family planning?”

The Family Planning National Training Center released the “Getting Ready for Male Reproductive Health Services Toolkit” while the Future of Sex blog predicts “The Future of Male Birth Control Is Near.”

An encouraging article from the Vanguard in Nigeria highlights men’s testimonies about using contraception: “We have great sex without the fear of unwanted children.”

Into this challenging environment steps Dr. Alvaro Bermejo as the new Director General of the International Planned Parenthood Federation. We wish him success!

Strengthening health systems to respond to women subjected to intimate partner violence or sexual violence: A manual for health managers, WHO, 24 Nov 2017

Why the Death of a Woman after Giving Birth to Quadruplets Should Change Healthcare in Nigeria Forever, Huffington Post, 22 Nov 2017

We have great sex without the fear of unwanted children, Vanguard, 19 Nov 2017

When there was no list of free abortion clinics, we made our own. Here’s how., Bhekisisa, 17 Nov 2017

The Ministry of Health in partnership with WHO and partners strengthens health information system for effective health service delivery in South Sudan, ReliefWeb/UNFPA, 23 Nov 2017

Remembering What Sex Ed Was Like in a Marxist Guerrilla Camp, Broadly, 24 Nov 2017

When a woman can control when she has children, she can control her future, The Guardian, 24 Nov 2017

“Just yesterday during the outreach service, a woman asked me why she didn’t get her period after having an abortion…”, IPPF (Cambodia), 24 Nov 2017

Could innovations in male contraception be the future of family planning?, Devex, 24 Nov 2017

India’s Free Online Condom Store Has Found Lakhs Of Takers, But Is It A Success?, Scoop Whoop, 22 Nov 2017

How to report on abortion – A guide for journalists, editors and media outlets, IPPF, 22 Nov 2017

Thanks to anti-abortion hardliners, we may end up with Sen. Roy Moore, Los Angeles Times, 21 Nov 2017

Recent State Actions on Women’s Health You May Have Missed, Center for American Progress, 21 Nov 2017

Why the Eight Amendment affects all women, Hot Press, 20 Nov 2017

Dr Alvaro Bermejo has been appointed as the next Director General of the International Planned Parenthood Federation, IPPF 20 Nov 2017

This Is How Contraception Saves Women’s Lives In The Asia-Pacific, BuzzFeed, 20 Nov 2017

Why are condoms unpopular in India?, Deutsche Welle, 20 Nov 2017