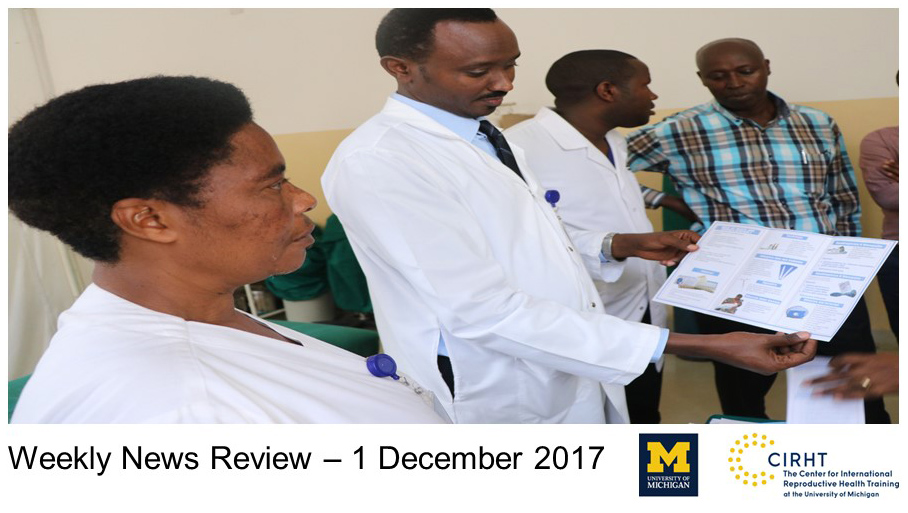 International AIDS Day on December 1st gave an opportunity to explore the link between access to family planning services and combatting HIV, which can both be related to gender inequality. Stigma around getting family planning counselling and access is closely linked to the stigma around getting tested for HIV or accessing treatment, causing “25% of pregnancy-related deaths in sub-Saharan Africa attributable to HIV and AIDS.”

The Trump administration Global Gag Rule  that withholds funding from any international NGO that provides services for, information about, or references for abortion, has influence here as well: “roughly two-thirds of the funding affected by the expanded Global Gag Rule is for HIV/AIDS programs around the world, under the president’s Emergency Plan for AIDS Relief (PEPFAR). PEPFAR has received broad bipartisan support and has been successful in reaching more than 13.3 million men, women, and children with lifesaving antiretroviral treatment.”

A prospective study at Columbia University will look at the impact of the Global Gag Rule on women’s health, starting with Kenya and Nepal. Another article from Madagascar shows the “serious consequences” of the rule on an island population where “10 women a day die from complications from pregnancy and childbirth.”

Expanding family planning availability is the focus of initiatives announced this week in Cote d’Ivoire, Gambia, Ghana, and Nigeria, where “four million pregnancies are caused by poor access.”

A few more ways to increase acceptance: a conference in Dakar addressed Muslim attitudes to contraception, “focused on values espoused in the Koran: the need for better maternal health and the need to ensure parents have resources to feed and educate their children.” It also comes down to individuals, as with the Senegalese activist disseminating accurate sexual and reproductive health information.

More stigma-free access to all of those service are ingredients of Radical Reproductive Justice, which centers on “three interconnected human rights values: the right not to have children using safe birth control, abortion, or abstinence; the right to have children under the conditions we choose; and the right to parent the children we have in safe and healthy environments.”

In Malawi, the increase in population is “hindering quality health care.” “53 percent of all pregnancies in the country are unintended; 141,000 abortions occur every year; 30 to 40 per cent of admissions in gynaecological wards in hospitals are due to abortion-related cases and 18 per cent of maternal deaths are due to unsafe abortion.” A law that will increase access has been urged by “chiefs, religious leaders and politicians,” but is being challenged by Episcopal and Catholic bishops.

Poland is “pushing abortion underground”, while the Brazilian parliament is seeking to eliminate the right to abortion altogether, even in cases of rape. Human Rights Watch highlighted the case of a woman who petitioned directly to the Supreme Court to ask for permission to have an abortion, which was denied on procedural grounds. The conservative MPs may have gone too far as women “are ready to fight for the few reproductive rights they still have.” South Korea is reviewing its anti-abortion law. In the UK, GPs may be free to issue abortion pills.

In the Nordic countries of Sweden, Finland and Norway, Abortion has been “non-politicised”, though a number of challenges have emerged from “conscientious objectors” in the medical profession. A study in Women’s Studies International Forum concludes, “although the recent Nordic developments have limited immediate consequences for the availability of abortion as a public service, they suggest, perhaps more importantly, that a long-term struggle is emerging over public opinion supporting universal abortion access.” Worrying.

MD magazine looks at a recent WHO/Guttmacher study on the “Advancements and Challenges in Global Abortion Safety”, quoting Bela Ganatra, lead author, scientist, Department of Reproductive Health and Research, World Health Organization (WHO): “It is surprising  — indeed heartbreaking — to see that over 25 million abortions in the world (almost 1 in 2) occur unsafely. This is despite the fact that medically speaking, safe abortion is a simple, safe primary care level service. It’s not science that is holding us back, its stigma, its politics, it’s the lack of trained persons, it’s the many barriers that make it hard for women to access these services.” Towards that safety, IPAS published a Medical Abortion Reference Guide.

Think Progress posits that a lack of proper medical school training in the US is causing a shortage of abortion doctors.

Thirty-year trends in the prevalence and severity of female genital mutilation: a comparison of 22 countries, BMJ Global Health, 25 Nov 2017

Dropping the ball or holding the line? Challenges to abortion laws in the Nordic countries, Women’s Studies International Forum, 24 Nov 2017

How a White House reversal affects a village in Madagascar, Toronto Star, 25 Nov 2017

Senegal leading the fight to end FGM in Africa, This is Africa, 28 Nov 2017

Medicaid patients can no longer use Planned Parenthood in Arkansas, KHOU, 1 Dec 2017

Survey: a majority of Americans disagree with the Trump administration on birth control, Vox, 1 Dec 2017

These Are the Government Officials Working Against Reproductive Rights, Teen Vogue, 30 Nov 2017

Dems set for abortion showdown in Illinois, The Hill, 30 Nov 2017

Why abortion — not sexual misconduct — is likely to decide the Alabama Senate race, Washington Post, 30 Nov 2017

The Guardian view on child marriage: wedlock is a padlock for girls, The Guardian, 29 Nov 2017

This Christian Woman Said Having An Abortion In A State Where The Procedure Is A Crime Was An “Eye-Opener”, Buzzfeed, 29 Nov 2017

How abortion could tip the scales in Alabama, The Hill, 29 Nov 2017

Indonesia to revive centers of excellence for population and family planning, The Jakarta Post, 29 Nov 2017

Women can wait up to a month to see an abortion provider in Queensland says doctor, Brisbane Times, 28 Nov 2017

The First Amendment Case That Could Upend Abortion Law, The Intercept, 27 Nov 2017

‘One minute we’re talking glitter, the next reproductive rights’: the rise of nail bar activism, The Guardian, 27 Nov 2017

Medical school training is exacerbating the shortage of abortion doctors across the country, Think Progress, 27 Nov 2017

South Korea to review whether or not to abolish anti-abortion law, Reuters, 26 Nov 2017

Haiti – Health : Towards a strengthening of the response in reproductive health, Haiti Libre, 26 Nov 2017

Crucial Vote in Brazil Could Lead to Ban on Abortion for Rape Victims, Medscape/Reuters, 22 Nov 2017