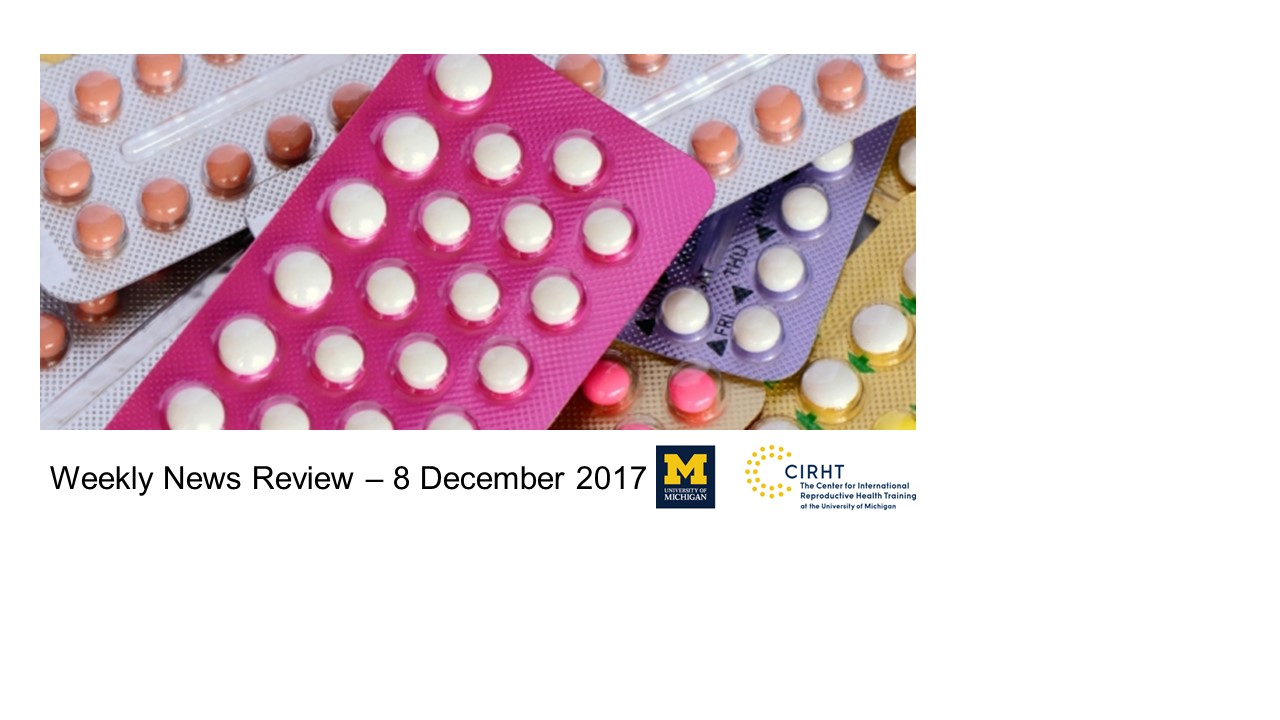 FP2020 marked its fifth anniversary with a bold “Way Ahead” recommitment to its mission: “We believe that every woman and girl must be empowered to shape her own life. We know that rights-based family planning is a critical element to empowerment. And we are confident that the FP2020 approach—country-led, grounded in human rights principles, buttressed by data and evidence, and accountable to all—is the way ahead.” It is “gaining momentum in the world’s poorest countries.”

This week’s review is based on FP202’s accomplishments and goals:

The week saw evidence across the spectrum about the effectiveness of access to contraception. The Center for Global Poverty and Development released a report that stated that “simply having access to contraception gives women a brighter future… regardless of whether a woman is actually taking contraception or not”, with the Economist noting that availability alone “raises female school attendance.” In Colorado, a contraception program has led to savings of millions through a drastic reduction in abortions and teen births.

The Safe Motherhood Initiative is celebrating its 30th anniversary, during which the world has seen a 44 percent decrease in maternal mortality. One of the main factors: “Reliable access to a mix of modern contraceptive methods.” It needs restating: Despite new branding, abstinence-only programs don’t work. The Financial Times lists six ways to increase uptake of family planning, including “long-acting contraceptives, mobile services and incentives.” Another way to make access easier: “online services that bring birth control straight to a person’s mailbox. ”

“Rights-based family planning programs have a greater ripple effect than almost any other development investment, from saving lives and improving health to strengthening economies, transforming societies, and lifting entire countries out of poverty.”

The Ghana Graphic Online notes that managing population growth improves quality of life, one reason, perhaps, that traditional chiefs and queen mothers are rallying to support family planning initiatives. More programs were launched in the past week in Egypt and Madagascar. Youth in Malawi are demanding private rooms for SRH counseling and care. Rwandan researchers want the vaginal ring integrated into family planning programs. While international technical and financial support may be necessary, programs must have local ownership, as withTthe Challenge Initiative in Nigeria.

Statisticians at the University of Massachusetts “found that 63 percent of countries that have made a commitment to FP2020 exceeded [previous] expectations for modern contraceptive use.”

That measurement can monitor successes as well as challenges, which exist everywhere as well. Among which: the physical constraints of the supply chain ; attitudes in traditional societies including the “Lobola” or bride-payment system in Zimbabwe or among refugees from South Sudan in Uganda. In Kenya, the high rate of teen pregnancies is a burden, blamed in the south on “boda boda” bicycle taxi drivers. Nigeria is seeing a rise in teen pregnancy, where “child and forced marriage, cultural and religious beliefs are fingered as factors responsible for the woe.”

And funding all of the efforts could be the biggest barrier. While Canada has renewed its UNFPA funding, overall donor funding for family planning is declining for the second year in a row – the Kaiser Family Foundation (KFF) reported a 12% drop from 2015 to 2016 – and with the full force of the United States cuts set to kick in across the sector next year, “progress is likely to become more challenging,” according to Devex. The proposed US tax reform law (which includes a stealth attack on legal abortion) is “bad news for birth control,” leading Senate Democrats to call on hundreds of thousands of advocates and patients to demand reinstatement of the benefits.

The Contraception Effect on Abortion Rates

FP2020 does not address abortion, but providing abortion should follow the same rights-based framework. Sadly, the statistics show that “while more corners of the world are legalizing abortions and old stigmas are beginning to turn, a shocking number of women and girls continue to be at risk of unsafe abortions” – some 45% of the global total.

Laws are changing to allow greater access in Malawi (where some priests are advocating for the change) and Bolivia; Egypt is codifying its restrictions (life of the mother; unviable fetus); in South Africa, a study in Contraception looks at identifying opportunities to expand public sector access to safe abortion; nevertheless, a private member’s bill has been introduced which would require counselling before an abortion. That same issue of Contraception, which exclusively addresses medical abortion, also includes research from Benin and Burkina Faso about the potential for use of misoprostol. An article from South Africa’s Bhekisisa says that in the face of a shadowy network of doctors, herbalists and conmen, women across the region are turning to “at-home, do-it-yourself abortion drugs that are mailed thousands of kilometres across continents and to countries where the procedure is illegal. They are breaking the law to get the pills that will, they believe, be far safer than back-alley abortions.”

Brazil is “grappling with its own version of Roe v. Wade”. Ireland, which will have a referendum on its abortion law in 2018, was criticized by the Council of Europe’s Commissioner for Human Rights over the current restrictions. The Council, though, warned of a backlash to abortion access through “retrogressive restrictions” across the continent. The abortion debate in South Korea requires a “reality check”, while in Singapore that reality “shows the needs of women and children are not being met.” There may be hope for the release from jail of a Salvadoran woman who miscarried and imprisoned for a suspected abortion.

In the US, abortion rates have fallen to historic lows; nevertheless, the Republicans are waging a war on women’s rights.

Internationally, the global gag rule will cause “women and girls to die” in Mozambique. KFF estimates that at least 1,275 foreign NGOs and 469 US NGOs, and over $2.2 billion annually could be affected.

Domestically, abortion politics are the “get-out-of-jail-free” card for Republicans, who are using it in political battles to push restrictions in Alabama, Kentucky, Illinois, North Carolina, Missouri, Pennsylvania, and Ohio.

Abortion has always been a part of society, even the heavily religious society in Malta in the 17th and 18th centuries, as a report in the Times of Malta reports: “The slave population seems to have been active in providing abortion services [which] were sought after throughout the social spectrum, from the nobility to the less privileged classes, from nuns to prostitutes.”

How it is portrayed in popular media can influence attitudes. In Cote d’Ivoire, “C’est la vie”, a pan-African TV series dealing with SRHR, debuted. Refinery29 looked at How Different Genres Of Television Handled Abortion In 2017; on the 10th anniversary of its release, Juno continues to affect young women: ‘Juno’ Made Me Feel Less Alone After I Got Pregnant as a Teenager. And the Lady Parts Justice League premiered an iconoclastic “Justice League We Deserve” – definitely worth a viewing.

Dapivirine Vaginal Ring Use Does Not Diminish the Effectiveness of Hormonal Contraception, Journal of Acquired Immune Deficiency Syndrome, 5 Dec 2017

Abortion in two francophone African countries: a study of whether women have begun to use misoprostol in Benin and Burkina Faso, Contraception, December 2017

In a rare court challenge to its abortion ban, Brazil grapples with its own version of Roe vs. Wade, Los Angeles Times, 8 Dec 2017

Stealth attack on legal abortion has no place in a tax plan, Chicago Sun-Times, 8 Dec 2017

Abortion Is the Get-out-of-Jail-Free Card of Republican Politics, Reason.com, 8 Dec 2017

This Is How Different Genres Of Television Handled Abortion In 2017, Refinery29, 7 Dec 2017

Access To Contraception Benefits Girls — Even If They’re Not Using It, New Study Finds, Romper, 7 Dec 2017

Contraception does even more good in poor countries than thought, The Economist, 7 Dec 2017

Abortion Access Is a Myth For Rural Women in Hawaii, Mother Jones, 6 Dec 2017

Alliance for Choice Statement on the closure of Marie Stopes Belfast, Alliance  for Choice, 5 Dec 2017

‘Juno’ Made Me Feel Less Alone After I Got Pregnant as a Teenager, Broadly, 5 Dec 2017

How Many Foreign NGOs Are Subject to the Expanded Mexico City Policy?, Kaiser Family Foundation, 4 Dec 2017

Nearly Half Of All Abortions Worldwide Are Unsafe, IFL Science, 4 Dec 2017

Beyond Politics: The Realities of Abortion Access in Alabama…, Alabama Public Radio, 4 Dec 2017

Abortion shows needs of women and children are not met, Singapore Times, 3 Dec 2017

Abortion in Malta at the time of the Knights, Times of Malta, 3 Dec 2017

Government of Sweden and four UN agencies announce new Joint Programme to boost efforts to achieve universal access to sexual and reproductive health and to end AIDS, WHO, 1 Dec 2017