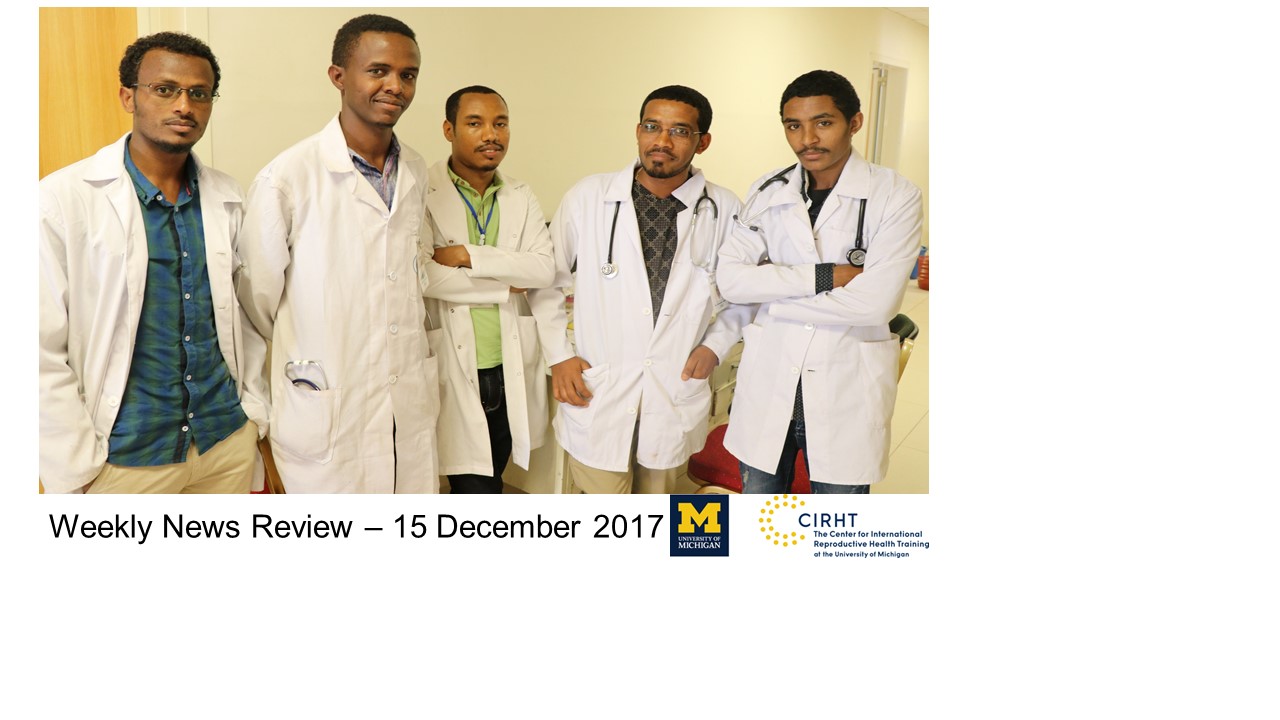 A core principle of CIRHT’s work is increasing capacity for doctors, nurses, and midwives to provide compassionate, comprehensive family planning services to women and girls, including contraception and abortion care. The CIRHT focus is on academia – curricula enhancement, faculty development and research support at medical and nursing/midwifery schools – and we salute the many other organizations that work to support women and girls as well in other ways.

Examples from just this week: WHO and the Ouagadougou Partnership announced “momentum towards improved reproductive health services;” the UN’s Nigeria Humanitarian Fund will “boost the reproductive health care of at least 130-thousand women and adolescent girls;” in Tanzania “teens want straight talk about contraception” and the government’s national health insurance fund is integrating family planning into its rural outreach program; and in Egypt, where “cultural perspectives” are the most important factor in whether a family chooses family planning, the government is distributing one million injectable contraceptives.

Bicycles are one mean of spreading family planning materials and awareness(as in Malawi), as is targeted mobile phone messaging (in Nigeria, South Africa, Bangladesh and India), or home delivery e-commerce sites for pregnancy tests and birth control (as in Rwanda).

Planned Parenthood research finds that when women self-inject the birth control shot, they are more likely to continue usage, while the UK’s leading maternity doctor says women should be able to take abortion pills at home.

Other studies on building capacity: two articles in Obstetrics & Gynecology – one looking at the need for physicians to be advocates and another on creating competency-based objectives for medical trainees to provide for underserved women around the world. K4Health elucidates on a strategy to increase community health worker provision of injectable contraceptives. FPNTC released a webinar on increasing capacity in quality family planning services.

A hopeful note in The Lancet about how this new capacity could achieve an acceleration in family planning in the near future: “Adolescents and young people themselves are increasingly more active and vocal. Especially in the poorest countries, if young people have early comprehensive sexuality and reproductive health education, access to contraceptive choices alongside secondary education, and early discussions on gender norms and power structures among both girls and boys, there might be hope for a future where choices lead to prosperity, wellbeing, and sustainable futures.”

A need for overhaul of policy on contraception and abortion in India, The Lancet Global Health, January 2018

Who Meets the Contraceptive Needs of Young Women in Sub-Saharan Africa? , Journal of Adolescent Health, 14 Dec 2017

The incidence of abortion and unintended pregnancy in India, 2015, The Lancet, 12 Dec 2017

Family planning: accelerating the way ahead, The Lancet, 9 Dec 2017

Training Physicians in Advocacy: Why It Matters, Obstetrics & Gynecology, December 2017

Don’t shy away from topics of reproduction with your wards – UNFPA, Ghana News Agency, 14 Dec 2017

It always seemed impossible for vasectomy until I did it, UNFPA, 27 Nov 2017

The ‘Choice on the Termination of Pregnancy Amendment Bill’ and its moral shortcomings, Daily Maverick, 12 Dec 2017

Here is why your teens might need contraceptives, The Independent (Uganda), 14 Dec 2017

Talk to your children about sex education, New Vision, 11 Dec 2017

Guess What? Vladimir Putin Is a Pro-Choice Champion, Fortune, 14 Dec 2017

The Pa. Agenda for Women’s Health is a positive alternative in Harrisburg, Penn Live, 14 Dec 2017

The Volunteers Helping Women Get Abortions Against All Odds, Vice, 14 Dec 2017

Half of young people do not use condoms for sex with new partner – poll, The Guardian, 14 Dec 2017

Irish Parliament Committee Backs Referendum on Abortion up to 12 Weeks, US News/Reuters, 13 Dec 2017

The rate of abortion in Australia is lower than you think, ABC (Australia), 13 Dec 2017

Feminism is word of the year, thanks to Trump, Weinstein, Reuters, 13 Dec 2017

The Govt Is Waging A War On Women’s Bodies In The Name Of Reproductive Healthcare, Youth Ki Awaaz (India), 13 Dec 2017

Even in States With Progressive Policies, Shame Can Contribute to Reproductive Health-Care Obstacles, Rewire, 12 Dec 2017

Is Economics Really Robbing Poor Women of Their Reproductive Rights?, The Wire, 12 Dec 2017

Return of the rhythm method – how natural contraception went digital, The Guardian, 11 Dec 2017

Abortion law campaigners ‘preach only to converted’, The Times, 10 Dec 2017

PA House To Consider Bill That Would Roll Back Abortion Ban To 20 Weeks, CBS Philadelphia, 9 Dec 2017

Your ultimate guide to choosing and using contraception, Vogue, 28 Nov 2017