The work of the Center for International Reproductive Health Training at the University of Michigan (UM-CIRHT) and its partners in Addis Ababa, Ethiopia, were highlighted during a recent visit by university Provost Martin Philbert PhD. The provost was in Ethiopia as part of a trip that took him to Ghana and South Africa as well, seeing a variety of U-M projects and partnerships.   He specifically included a visit to St. Paul’s Paul’s Hospital Millennium Medical College (SPHMMC) in his Ethiopia trip itinerary. The group was joined by CIRHT’s founder and UM distinguished alumna Dr. Senait Fisseha.

UM-CIRHT’s Managing Director Janet Hall, outlined the center’s history in Ethiopia, which began in 2014 with a partnership between UM and SPHMMC that was started by Dr. Fisseha.  The goal of that partnership was to boost preservice training in family planning and comprehensive abortion care for medical students, and to help establish an Ob/Gyn residency program that integrated family planning and comprehensive abortion training into St. Paul’s curriculum.  Based upon the success of that initial collaboration, UM-CIRHT’s partnerships in Ethiopia grew to include an additional nine institutions around the country along with expanding to include midwifery and nursing students. The center’s focus remains using the pre-service education approach to reduce maternal mortality and morbidity from unsafe abortion and give women and girls more control over their reproductive lives.

The in-country team walked the provost through the most important aspects of the center’s partnerships: Evidence-based medical education, improving clinical service and the quality of care, fostering research and local evidence generation, monitoring and evaluation and expanding to enhance nursing and midwifery programs as well.

As the former dean of the School of Public Health, Dr. Philbert gave his insights into several of the practical elements of UM-CIRHT’s work, including expansion of electronic medical records and integrating doctors, midwives and nurses into unified patient care.

He toured the reproductive health clinic at SPHMMC, called a “Michu”, which is the Amharic word for “comfort”. The provost said he was encouraged by the increased involvement and support of men in supporting women’s family planning decisions and clinical visits.

UM-CIRHT has helped its partner institutions with physical infrastructure, upgrading clinical skills including anesthesiology and pathology, and faculty development. Provost Philbert praised the multifaceted approach, and said that U-M is always interested in integrating other disciplines in improving overall healthcare outcomes. 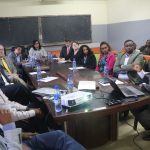 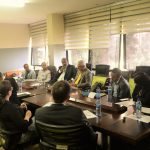 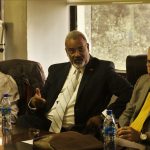 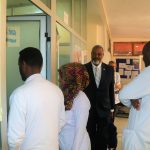 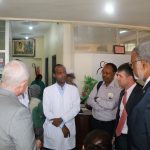 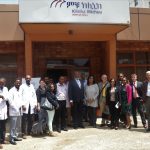